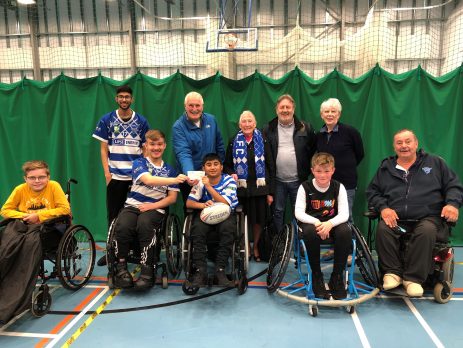 Mark Moore2022-10-29T08:18:47+00:00
The Faxtrust Board presenting a donation of £100 to support the Halifax Wheelchair Club in their bid to purchase a child’s wheelchair for a future member.
October 29, 2022By Mark MooreUncategorized0 CommentsRead more...

A message from our Chair - David Durbin Despite the disappointing end what a great season we have had! A massive thank you to Simon and all the lads for giving us some of the best rugby that has been played for a long time. Entertaining, quick and full hearted is all that you want from your team and this was delivered in bucket loads. No wonder Simon was nominated for coach of the season and Joe Keyes for the player award as this was thoroughly deserved. The start of the new season can’t come quickly enough for me and more of the same style will I’m sure take us that step further. Bring in on!! Your Trust Board are now in the planning stage for next year with an updated website in terms of merchandise, and of course you will still be able renew your memberships through it which runs out at the end of December. We will still be in attendance on home match days and if you have any pre-loved or unwanted shirts/shorts or any other rugby merchandise to donate please contact any Board members or myself on 07790 852196 and we will be happy to collect them from you. This has been a very successful way of raising funds for the Club which I hope you still feel able to support. If you have any ideas on other fundraising opportunities, please do not hesitate to contact us. The season might be over but we are still working on behalf of you and the club. David ([email protected])

Panthers Wheelchair Grand final winners!!! Halifax Panthers wheelchair rugby league club were classed as the underdogs in the games Grand Final. Leeds finished top of the domestic league having lost only once, that loss was in fact to Halifax at the beginning of the season when they were short of several internationals. Both sides were at full strength and it was Fax who won the archetypical game of two halves going in at half time 36-16 ahead. Leeds however came out and clearly had a different game plan with accurate out of hand kicking to turn the Panthers around time and time again, plus scoring back to back converted tries to claw their way back to 36-28. Fax pulled away again on their rare time in the Leeds half, 42 – 28. However, with 8 minutes to go it was 42-42. Rob Hawkins, who in his early days was a Shay ball-boy, scored twice and converted one for the Panthers to lead 52-42. With two minutes to go Leeds squeezed in for converted try and were now 4 points behind 52 -48. Halifax however held out and went wild with their celebrations in front of the Sky and BBC sports cameras. Now these players will be mostly on the same team as the World Cup starts for them on 1st November. All games being televised. We would love to see some of you at our games next season – Kind regards – Malcolm Kielty

Panthers’ Community Update from Kara Colvin This month the community panthers have been; • Coaching in 3 different primary schools, active lunch times as well as after school clubs, securing some of the primary schools from the last academic year and now having two new schools on board with the programmes. • Coaching in 4 high schools, after school clubs only at the minute with a view to join in with the pe curriculum next year and coach within the pe sessions for all years. • Meetings and discussions have been had with Bradford girls’ grammar to coach their newly formed tag team – who will compete in games against other schools, branching out of Calderdale but the need and want is there so I’m on it. • Several primary schools are already on board for the shay show down tournament to happen next year so the planning is in progress now to have all the primary schools wanting to compete at Calderdale college for a huge tournament next year. • Community club coaching from panthers is still ongoing, with more community clubs asking for a panther presence which is amazing. • The last game for the men’s team at the shay proved a huge success with engagement with community clubs as we saw the biggest gathering from them – 498 people bought tickets for the game from community clubs alone! • The men’s and women’s academies have had their first games of the season and both came home with wins, the women’s academy has boosted its numbers and has a player chosen for the England DiCE pathway. • Work continues for the world cup game being held at the shay in the next coming week. • The end of October sees another try high camp – alongside Calder community squash and Invictus well being the panthers will be there once again. • Several different projects are awaiting funding, but funding has been received to run a healthy eating and rugby 40 week programme for not so affluent areas of Calderdale so this is now going to start taking place. • Violence reduction unit across Yorkshire are willing to work with panthers in the upcoming months so watch this space!! • The world cup trophies will be at the piece hall on the Friday before the shay host the world cup warm up game – alongside the Tongan player, French players, Halifax men’s, women’s, wheelchair and academy teams. • Name the mascot is going to get underway in schools this month to name our mascots and spread the panther brand. Kind Regards, Kara Colvin 07309782215 Community Development and Engagement Manager – Community Panthers CIC